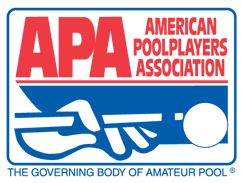 Today, the APA, also known as the Canadian Poolplayers Association in Canada and the Japanese Poolplayers Association in Japan, has grown to nearly 250,000 members and boasts more members than all other “national” leagues combined. The League is administered locally by a network of Franchise Operators, called League Operators, and is conducted weekly in a variety of both 8-Ball and 9-Ball team formats. There are nearly 300 APA Leagues throughout the U.S., Canada and Japan.

APA League teams have the opportunity to advance to the APA World Pool Championships each summer in Las Vegas. In 2010, Guinness World Records recognized this event as the World’s Largest Pool tournament. In addition, the APA also hosts a second tournament, the APA Poolplayer Championships, in Las Vegas each spring. APA pays out a combined $2 Million annually at these tournaments.

The APA also conducts the U.S. Amateur Championship, the pool world’s most prestigious amateur tournament, which is the only competition open to APA members and nonmembers alike. The tournament began in 1994 and has grown significantly over the years, as players across North America battle for a spot in this coveted event.

The APA is has also been recognized as one of the top small business and home based franchise opportunities in the world. Entrepreneur Magazine has recognized the APA each year since 1999 in their Annual Franchise 500 rankings. In 2010, Forbes magazine ranked the APA as the #2 “Top 20 Franchises to Start.”

One of the keys to the success of the American Poolplayers Association is The Equalizer®, the unique handicapping and scoring system that makes it possible for players of different playing abilities — especially novices and beginners — to compete on an equal basis, much like they do in golf and bowling. The Equalizer® uses a formula that measures a player’s ability. The result is a handicap of how many games a player must win to capture a match in 8-Ball or the number of points a player must earn to win a match in the 9-Ball format.

One of the Most Highly Rated Franchise Organizations

The APA has gotten accolades such as “Best in Category” for Sports & Recreation Franchises by Franchise Business Review, “10 Great Franchises for Less than $20,000” by Entrepreneur Magazine, and more!

APA is also a member of the International Franchise Association and Veterans Transition Franchise Initiative.

What is the APA?

The American Poolplayers Association (APA) is the largest amateur pool league in the world with over 250,000 members. With leagues playing in over 13,000 venues across North America, it is the first choice for poolplayers of all skill levels.

Are You APA Material?

Is being a League Operator right for you?

– Outgoing and goal-oriented with a get-it-done attitude
– Experience in sales and/or marketing with experience in a related field
– Financially stable with a positive net worth
– Computers skills should include Microsoft Office, Excel and online navigation