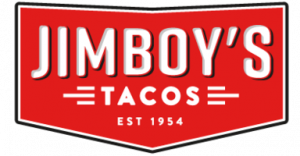 For six decades Jimboy’s has been bringing abundance of happiness into peoples’ lives by focusing on ONE THING: Serving our unique "The Jimboy" original ground beef taco.

1953: Founder Jim “Jimboy” Knudson tastes his first taco. That first bite convinced “Jimboy” that the taco would have universal appeal, so he began to develop his own recipe.

1954: Jim and his wife Margaret, converted a 16-foot trailer into a mobile kitchen, creating one of the first “food trucks” in the nation. That summer, the couple towed their trailer up to King’s Beach, Lake Tahoe and began selling Jimboy's tacos to customers.

1958: Joe King (owner of King’s Beach) built a small building on North Tahoe Blvd. and the very first Jimboy’s Tacos restaurant was born. People could not get enough Jimboy’s tacos and word was spreading fast. That little taco stand became a favorite among locals and tourists alike, building quite a reputation. There was a good chance you would catch members of the famous “Rat Pack,” stars from the Bonanza TV show, and other well-known celebrities enjoying a Jimboy’s Taco!

1959: The taco trailer was moved to the Denio’s Auction Yard in Roseville, California. Eventually, a permanent taco stand was opened, and even today the Knudson family is still selling tacos there during the busy weekends at Denio’s.

1968: Jimboy’s Tacos began franchising, one of the first restaurant concepts to do so nationally.

1979: Jim Knudson sold a master franchisor contract to three of his best franchisees, including Don Rapisura who eventually became the sole master franchisor.  Don’s leadership forged a surge in growth of Jimboy’s Tacos restaurants in Northern California and Nevada.

1983: Jim Knudson retires from Jimboy’s Tacos, and he and his wife, Margaret begin a new food inspired mission: creating the best tasting chili. Their son, Scott Knudson, takes over as President of Jimboy's Tacos Inc. maintaining the Jimboy’s legacy, vision and philosophy.

2010: Scott Knudson retires and Karen Knudson-Freeman, Jim and Margaret's daughter, takes over as President of Jimboy’s Tacos Inc. Under Karen's leadership, the number of Jimboy’s Tacos locations continues to increase.

2016: Jimboy’s Tacos launches a brand refresh called “Reimaging Jimboy’s Today” featured at the opening of Jimboy’s Tacos in Anaheim, CA, across the street from Disneyland -- clearly making it the “happiest place on earth!”

You will receive assistance in employing a proven methodology for site selection identifying, evaluating, and securing sites that best meet our operating requirements.

Your Design and Construction team will roll up their sleeves early driving key milestones throughout each phase of the entire restaurant development process from dream floor plan to CO while ensuring high quality construction, on time! and on budget!

Over the years we have perfected taco making. It’s simple, we follow three rules. We love our ingredients, we smile while we’re cooking and we repeat. We keep it simple and we work hard. We like to say happy guest, happy business.

After 64 for years of serving the most craveable taco on the planet, it’s safe to say that we know who we are. Our branding and marketing is simple. Feed hungry people tacos that they love and crave.

We will work hard, have fun and take a dollar spent serious. You will enjoy established purchasing contracts and rebate programs from many of our vendors. We continuously work at obtaining better pricing and service.